Tomorrow is February 1st, and we all know what that means…the CTMH Spring/Summer 2014 Idea Book is released to the public.  The papers in this IB are beautiful.  Today, I thought I would make something using one of the new packets called Ariana (X7179B.) 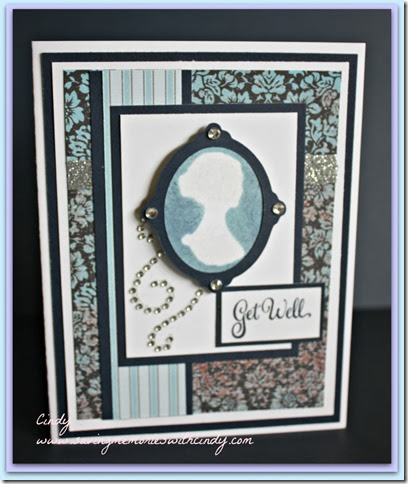 I will let the papers speak for themselves.  Ariana is a vintage look collection that features Crystal Blue, Outdoor Denim and White Daisy.  It also features Ariana Green, Ariana Gray and a beautiful color called Ariana Coral.
For me, cameo’s have always screamed vintage so I thought that a cameo image would be perfect to introduce this paper packet. 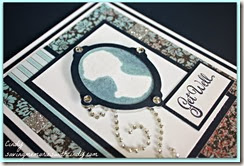 I used my CTMH Artiste Cartridge to make the cameo.  First I cut the frame in Outdoor Denim.  You can find it on the “W” key using the Accent 2 feature. I cut it at 2 1/4 inches.  Next I cut out the same image but 1/4 inch larger and in White Daisy.  I did this because I wanted the an oval that would be a tad easier to work with for my background.  Then, with the “W” key, Accent 2 feature and shift, I cut the cameo face back on 2 1/4 inches.  I positioned the cameo on the White Daisy oval and began to sponge around the cameo…I used it as a mask.  I sponged heavily with Crystal Blue and then lightly with Outdoor Denim.  If you try this, make sure that you do not move the cameo face or your image will be fuzzy.  Lastly I very lightly sponged the white daisy cameo face with Whisper ink for a little depth.  Then just adhere your oval inside the frame.  There you go…your cameo is done!


Just a few more things about this card.  The sparkle flourish is from the Sparkles Clear Flourishes – Small pack (Z1812) and the sentiment is from a set called Sincere Expressions (A1146.)  Oh...almost forgot...that is Silver Shimmer tape (Z1799) across the tops. So, tomorrow, don’t forget to visit my website to see all the new goodies CTMH has to offer.  For Now, Happy Crafting!
Posted by Unknown at 3:34 PM No comments: 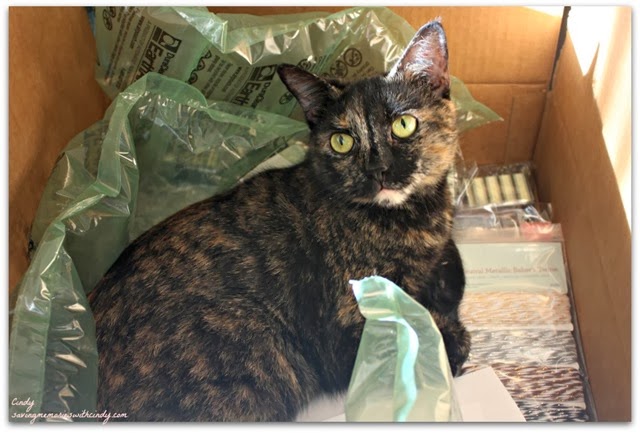 The CTMH Spring Summer 2014 Idea Book will be released in just 5 days.  I can hardly wait.  Bombay asks what about you?  For Now, Happy Crafting!
Posted by Unknown at 10:16 AM No comments:

Email ThisBlogThis!Share to TwitterShare to FacebookShare to Pinterest
Labels: 2014 Sneak Peek, For Fun

I am so excited about the upcoming CTMH Spring Summer Idea Book.  My supplies are beginning to arrive at my doorstep and you will be able to begin to order the goodies beginning February 1st.


One of the wonderful features that is continuing in this IB called Jeanette’s Stamp Archive.  This is a collection of stamps created over the past 30 years by CTMH’s founder, Jeanette Lynton.  This Idea Book has 4 new stamps.  Each of them is cuter than the next.
I’ve chosen one to complete a Valentine Card and that will give you a sneak peek at one of the many new items. 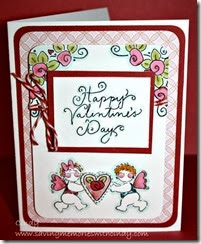 The stamp is called “Coming Up Roses” (C1579.)  While it does have the sentiment “Happy Valentine’s Day,” I think the cute cherubs and roses work year round for both scrapbook layouts and cards.  I’ve colored them with my CTMH Alcohol Markers and used paper from the Chantilly (Z1814) paper packet.


Chantilly will be retired effective January 31…right as the new IB becomes available.  It is a terrific paper packet featuring bright and springy colors.  Coming Up Roses is available February 1st.  Stop by my website if you would like to order Chantilly before it’s gone.  And, mark your calendar to stop by on February 1st to see the new CTMH Idea Book.  For Now, Happy Crafting!
Posted by Unknown at 5:14 PM No comments: 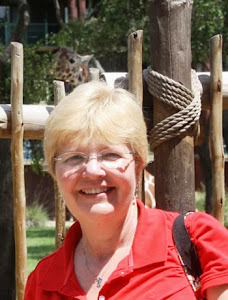 Helping people smile has always been one of my greatest passions. Becoming an Independent Close To My Heart Consultant was the perfect option for me. I spend my day creating wonderful projects and then get to share the joy by either having the opportunity to teach how I made the project or seeing faces light up when they receive that special card made just for them. CTMH products are well made and offer so many options for both the novice and advanced papercrafter. Being a Consultant has opened so many doors. The freedom to create, earn income and meet many wonderful people are just a few examples. If you are interested in sharing the joy through creating beautiful projects using CTMH or want join my team and help to spread joy, please contact me.

Promote Your Page Too

A Few Favorite Posts From Papers Pads And Pictures